“If you’re passionate and persevere, the right people will notice!”

In the latest entry in our #womeninsport series, Onuba Comms’ Nick Aitken caught up with media, communications and broadcast operations expert Mona Yeganegi – who’s also a qualified child psychologist – to hear about how her fields of study overlap, her experiences across a whole range of sports, and a long-running “tradition” of participating in Olympic ceremonies!

Onuba Comms: What drew you to the world of sport and communications, having originally trained in child psychology? Have there been any instances at sporting events over the years where your psychology training has proved useful?

Mona Yeganegi: Sport’s been a major part of my life since I was very young, having been an active swimmer, footballer and a keen follower of the Olympics! I think sport can be a very useful tool in promoting mental and physical health, breaking down barriers, creating inclusion and when advocating for basic human rights.

Medicine too has been a lifelong interest, as my parents and sibling are all medical professionals, so I love to see it when national associations and international organisations use sport and education to contribute to the health and wellbeing of people around the world, particularly the young and the vulnerable.

I’ve also seen first-hand through my media work at events about the importance of mental strength in sport, and it’s something I’ve frequently used as a tool when working as a Child Psychology specialist too. So yes, I do think my understanding of mental health and psychology has been useful, whether that be in sports media and communications or doing broadcast work as a journalist and presenter. 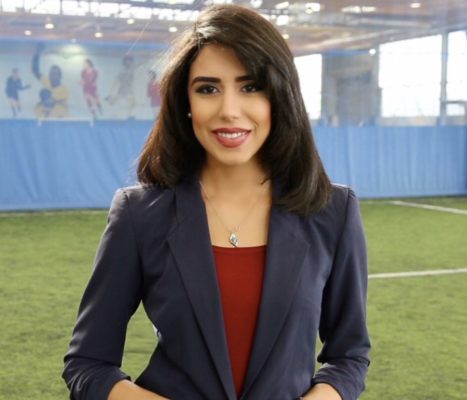 OC: You’ve been involved with sport for over 12 years, in a number of different roles and across the spectrum of football, tennis, ice hockey, cycling, summer and winter Olympics and the Paralympics! Has your versatility helped you to gain this extensive experience? What are the pros and cons of covering so many different sports?

MY: Absolutely, taking part in events across the world working for a number of different federations and organizations definitely helped me gain knowledge, adaptability and expertise in my field. Twelve years is a long time and throughout the journey I’ve always tried to grow both personally and professionally.

I don’t really see any downsides to having covered different sports, as I’ve always enjoyed the diversity of working in varied roles for different federations – stepping out of my comfort zone and taking on different challenges. While there are common threads across sports – in terms of how operations are planned, coordinated and carried out – each federation, each organization and every single event has its own “personality”.

Though my experience mainly lies in football, the Olympics and hockey, and that specialist knowledge is, of course, important, I very much enjoy being asked to work at different events. There’s no doubt I’ve met so many more people through criss-crossing all these sports than I would have by working with just one organisation.

OC: We hear that you’ve got something of an ongoing “tradition” when it comes to Olympic opening ceremonies! Can you tell us about it? Are you hoping to keep the sequence going in Japan?

MY: That’s right! I’m lucky enough to have been involved in media/broadcast roles at seven Olympic Games so far and, when possible, I always try to get involved in either the Opening, Closing and victory ceremonies too!

To date I’ve been a medal and flower bearer in victory ceremonies, an athlete welcome-ceremony gift bearer, part of a sports-production crew, a country-placard bearer in Opening and Closing ceremonies, a flag bearer and a dance performer! It’s not all fun and games, as the ceremonies’ teams go through months and years of planning and training, to make sure every second goes to plan, but every ceremony I’ve been involved in has brought me so much joy and so many special memories – ones I’ll never forget.

If all goes to plan I should be working at the Games in Japan, which I’m extremely excited about. I’m not sure yet if I’ll be able to take on any ceremony roles, but watch this space!

OC: You’ve also got broadcast experience, both behind and in front of the camera. Does having been a producer help when in the role of news anchor or sports reporter? And vice versa?

MY: Definitely! I’m an experienced journalist and presenter for both news and sport, and I think that being involved in front of the camera has without a doubt helped me gain a better understanding of the production side. There have been times where I’ve been required to do both at the same event – i.e., be on camera at certain points and also produce content at others – and it’s something that I want to keep on doing in future.

In terms of tone, I’d say that news journalism is generally more serious, since it holds significant weight in the world and in people’s everyday lives and decisions. A news anchor has the power to create a bridge between the story and the audience – and it was holding that responsibility and learning that difficult skill which drew me to the role in the first place.

The tone of sports journalism is often lighter, but I think it also carries a considerable weight and makes a difference in its own way – thanks to its power to inspire, create joy and to unite audiences. 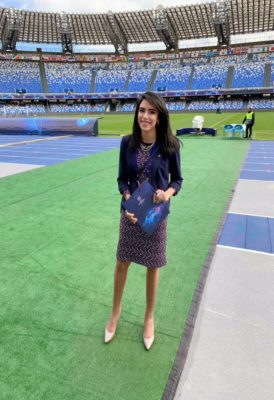 OC: Last but not least, if you had to pick one key piece of advice to give to those people looking to follow in your footsteps and work in sport and the media, what would it be?

MY: Tough question! I think if I had to pick just one piece of advice it’d be this “believe in your ability, but lose your ego”. Being in this field and business can change a person and change them fast, so it’s important to stay humble and grounded along the way.

Equally, it’s vital to believe in what you have to offer, even if it sometimes seems that nobody else can see it! The journey isn’t always easy and you will face rejections, but see them as a redirection towards something better. I’d say that, in life, direction is far more important than speed – and it’s tempting often to try and go fast, without knowing where you’re going. But if you persevere and you’re passionate about what you do, the right people will eventually notice, I assure you.

Want to continue the conversation? Connect with Mona via Instagram or LinkedIn!

Experts in football & futsal and only using native-language translators and copywriters, we at @onubacomms believe everyone in sport should have the opportunity to connect with their global audience. 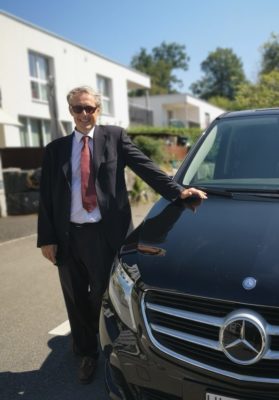