It was back in 2007 when Diego Valeri established himself as one of Argentina’s most promising young players, proving a driving force in his beloved Lanús’ charge to that year’s Torneo Apertura title. Since then he has also caught the eye on European soil in the colours of Portuguese giants FC Porto and La Liga outfit Almería, with Valeri currently the beating heart of MLS high-flyers Portland Timbers.

That said, Valeri’s sporting career has been largely forged away from the spotlight and this, allied to an admirable thirst for personal growth, make his story that much more remarkable. In addition to his native tongue, the attacking midfielder is fluent in German, Portuguese and English, language skills aided and abetted by his passion for reading, particularly regarding the fields of theology and philosophy. 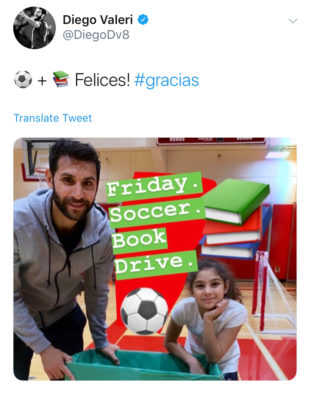 In social-media terms, Valeri adeptly uses his channels – in which he regularly switches between English & Spanish – to reflect his beliefs and wide-ranging knowledge, making following him via Twitter (@DiegoDv8) and Instagram (@diegovaleri8) a real pleasure. Here at Onuba Comms we are fierce defenders of the right of every sportsperson, whatever their field, to create quality multilingual content that helps connects them with their global audience, and the Argentinian schemer has done so in spades.

Genuine, vibrant, informative and always worth listening to, Diego Valeri has grown into a social-media icon, one who in a recent interview mentioned that a player’s “life shouldn’t just revolve around a football”. Voted the MLS’ MVP in 2017, he has spent a hugely enjoyable six years in Portland, and it would be a surprise were he to be tempted away from a club where he is affectionately dubbed the “Maestro” and the “Librarian”. And the story of Valeri, a man of strong religious faith and family values, certainly needs checking out.