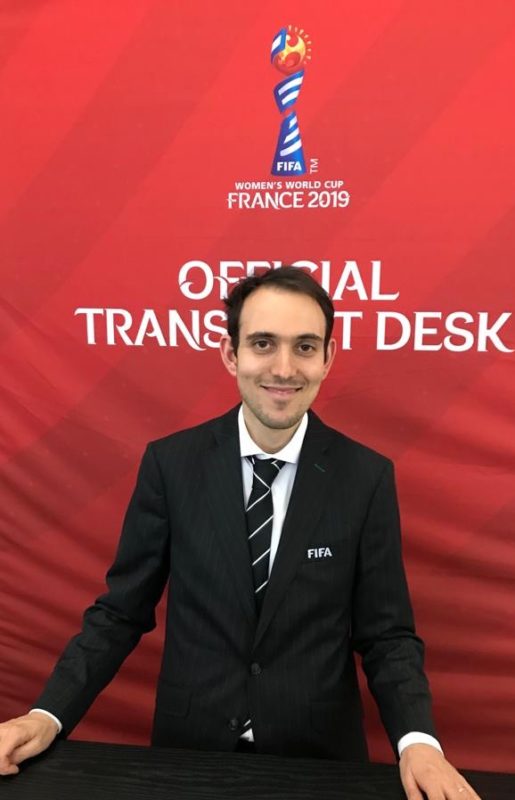 “What’s in a name? That which we call a rose by any other word would smell as sweet”

I’m not given to disagreeing with Shakespeare, but having grown up in London with an utterly un-English name and grappled with daunted teachers, time-pressed call-centre agents and overworked doctors throughout my childhood, I’ve always been sensitive to the matter of getting it right when referring to people and things.

However, when dealing with football clubs’ and players’ names in different languages with distinct naming conventions and cultural backgrounds, this can be a minefield. I run through some standout examples below.

1. Manchester mayhem and a tale of several Cities (and Uniteds)

I’ll always remember, a week after moving to Barcelona, being asked by my Catalan flatmate how I thought el Manchester would fare that season (coincidentally, Catalonia was once known as the Spanish Lancaster and Barcelona as its Manchester). My reflex reaction will not surprise any Anglophone fans: which Manchester? Therein lies the rub: in Spain, el Manchester almost universally refers to Man United, whereas no Britain-based football buff  – even notwithstanding the sniping about Trafford, the municipal boundaries, Abu Dhabi and which is the true club of Mancunians – would conceive of referring to either club simply by the city name.

However, this piece is not about naming and shaming, and it’s worth noting that fans of both clubs – and of the English top flight – routinely use the shorthand “United” and “City” to refer to these arch-rivals, even though there are countless others whose names feature these appendages (including historic outfits such as Birmingham, Leicester and Stoke City and Leeds, Newcastle, Sheffield and West Ham United).

Contrariwise, it is exceedingly common for Anglophone fans of La Liga to refer to Real Madrid, European football’s most decorated club, as “Real“. So far, so logical for a British supporter, given what we have noted above about “Manchester”, but the issue cuts both ways: there is a large handful of Spanish clubs whose names begin with the Spanish word for “royal” and whose badges aptly incorporate crowns of assorted shapes and sizes, including Real Málaga, Mallorca and Valladolid, to name but a few. So it is that for local aficionados, Los Blancos are known simply as el Madrid, something to which their “noisy neighbours” – Atlético Madrid, or Atleti for short – do not appear to object.

Funnily enough, however, the accepted abbreviation for Real Sociedad is La Real (the San Sebastian outfit can lay sole claim to such a moniker because, unlike the other royally connected clubs mentioned above, the second half of their name – Sociedad – is feminine). By contrast, the nickname habitually, and erroneously, trotted out in the Anglophone media is “Sociedad”. Confusing or what?

3. The importance of being Sporting and Athletic

Staying on the Iberian peninsula, two historic heavyweights have been campaigning in recent years to convince overseas fans to stop appending the cities where they are based to their names. I am talking about the Portuguese giants Sporting Clube and the Basque Country’s Athletic Club, routinely known to most English-speaking fans as “Sporting Lisbon” and “Athletic Bilbao” respectively. Strange as it may seem to those brought up with the latter names and who have never known the clubs any other way (as was my case until I moved to Spain and began working in football), this is a highly charged issue, as shown by the reactions to #dontchangeournames campaign launched on Twitter.

While many fans of other teams and from other countries were seemingly unperturbed, it is worth noting that others – including from places as far and wide as Berlin (Hertha BSC), Milan (Internazionale FC) and Turin (Juventus FC) – were quick to join in and point to the same issue befalling their own clubs. Swiss German outfit FC Basel provide another example, with the BBC, among others, having long been guilty of using the French spelling and pronunciation before taking the club’s preferences on board.

Again, though, far from Anglophone pundits and fans being the sole culprits, some English-language clubs are also victims of the very same phenomenon: namely, Arsenal and Celtic, among others, whom many non-natives refer to as “Arsenal London” and “Glasgow Celtic”, even though the cities do not figure in their respective official names.

It has been suggested that this is a relatively new issue, spread by video games and the internet. However, a trawl through the British Newspaper Archive reveals that names such as Athletic Bilbao and Sporting Lisbon have been in use for numerous decades, since well before analogue made way for digital and football computer games became all the rage. 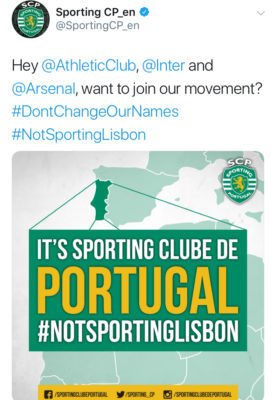 The power possessed by names is compellingly demonstrated by the case of Jordi Cruyff, son of the late Dutch genius, Johan. Cruyff Sr moved from boyhood club Ajax to Barcelona in the early 1970s, when Spain was still under the rule of the fascist dictator Francisco Franco. During this period, expressions of Catalan identity were outlawed, including Catalan names. In this context, the legendary forward/attacking midfielder and coach-to-be’s decision to name his son Jordi after the patron saint of Catalonia not only cemented his popularity with his new fans, but it was a hugely symbolic gesture, flouting the Franco regime’s authority. The story goes that, in order to pull off this act of defiance, Cruyff had to fly back to his native Netherlands to register the birth, and his son duly became Catalonia’s first freshly christened Jordi for many a year.

Despite the seeming weight of this history, Cruyff’s son – who was also a professional footballer (and is now a coach) and even played under his father when breaking through as a youngster at Barcelona – opted to wear his first name on his shirt in a bid to skirt the added pressure and publicity associated with his surname:

Several other players have disowned their surnames for various reasons, including former Fulham forward Bryan Ruiz and Tottenham star Dele Alli, both of whom have noted that they feel no connection to their family names due to suffering abandonment. Dele released a statement outlining his reasoning in 2016 and the English national team set-up sent a request to media outlets in the run-up to the 2018 World Cup in Russia, yet this has not been sufficient to persuade even his own club’s fans to adjust the chant that they sing in his honour.

Another thing that caught my attention after moving to Spain was how regularly players are “stripped” of their full names in journalistic material. I am not talking about commentary or punditry, when time is obviously at a premium and a player’s full name will therefore only be uttered for emphasis, during the less frenetic sequences; rather, in previews, match reports, player profiles and many more besides, a number of footballers are referred to exclusively by one name.

The only players referred to in full are Marcos Llorente (a treatment born out of historical necessity, given that he came up through the Real Madrid ranks alongside surnamesake Diego), Eden Hazard, Luka Jović and Mateo Kovačić (all of whom are discussed in some detail), Ferland Mendy, Éder Militão, Rodrygo Goes (who is generally known as “Rodrygo”) and Raúl de Tomás. This is par for the course in Spain, where only certain, seemingly arbitrary individuals – including De Tomás, plus the likes of Jordi Alba, Sergio Ramos and Diego Costa  – are all but guaranteed to have their first name mentioned.

By contrast, a clear convention applies to any similar pieces in English outlets, such as this talkSPORT gossip column: a player’s full name is employed on the first mention and the surname is primarily used thereafter. Only when players have universally accepted abbreviations or nicknames, such as the aforementioned Isco, are these always used, with the full name never mentioned.

I said “seemingly arbitrary” above because in actual fact, things are not as random as they seem and, again, the discrepancies cut both ways. Diego Costa, Jordi Alba, Sergi Roberto and Sergio Ramos are chiefly called by their full names in Spanish because this is largely what they have worn on the back of their shirts in Spain.

Moreover, the English custom of nearly always using two names and abbreviating as a matter of course thereafter is not without its drawbacks. For example, it is not uncommon to see Spain manager Luis Enrique referred to simply and nonsensically as “Enrique” by Anglophone sources unaware that his surname is, in fact, Martínez and that his nom de pitch “Luis Enrique” combines his first two names. This is the equivalent of invoking plain-old Marc ter Stegen, Tore Flo or Jean Rousseau, for that matter.

On a side note, the English game has always been far more averse to the use of nicknames and abbreviations than vast swathes of the rest of the football world, including notably Spain, Brazil and Argentina, where such customs are endemic. To many English-speaking fans, indeed, foreign footballers’ nicknames epitomise the exotic, as embodied by BBC 5 Live’s World Football Phone-in‘s tradition of awarding “Brazilian shirt names” to regular callers and by the plethora of online nickname generators. Even for those accustomed to such practices, though, the biscuit is arguably taken by Spanish women’s football, where monikers such as Mapi (e.g. Mari Paz Vilas and María Pilar León), Estefa (Esther González and Estefanía Lima), Chica (María de los Ángeles Martín Sánchez, admittedly a mouthful) and Maite (María Teresa Albarrán) abound.

The TL;DR takeaway from all of this: referring to a club or player is not always a straightforward matter. Ultimately, a lot comes down to target audience. Talk to most English-speaking fans about Sporting Clube or Athletic Club and they won’t know what you are on about. Accordingly, Sporting Lisbon and Athletic Bilbao remain in common usage among English-language media outlets.

However, if you are writing or translating for an institutional client, such as a league or a player, it stands to reason that you should use the club or player’s preferred name and do your bit not only to represent their interests, but to educate foreign fans along the way.